The store will not work correctly in the case when cookies are disabled.

Do not show again

by Vermillion Editorial
Asian Craft A to Z

Asian aesthetics have become mainstream and it is common to see Buddha statues and batik cushions in many modern households. But there's much more to Asian decorative arts than meets the eye. In this series, we dive into different traditional crafts from Asia, examining their roots, histories, and stories – along with how they continue to evolve and define design today. 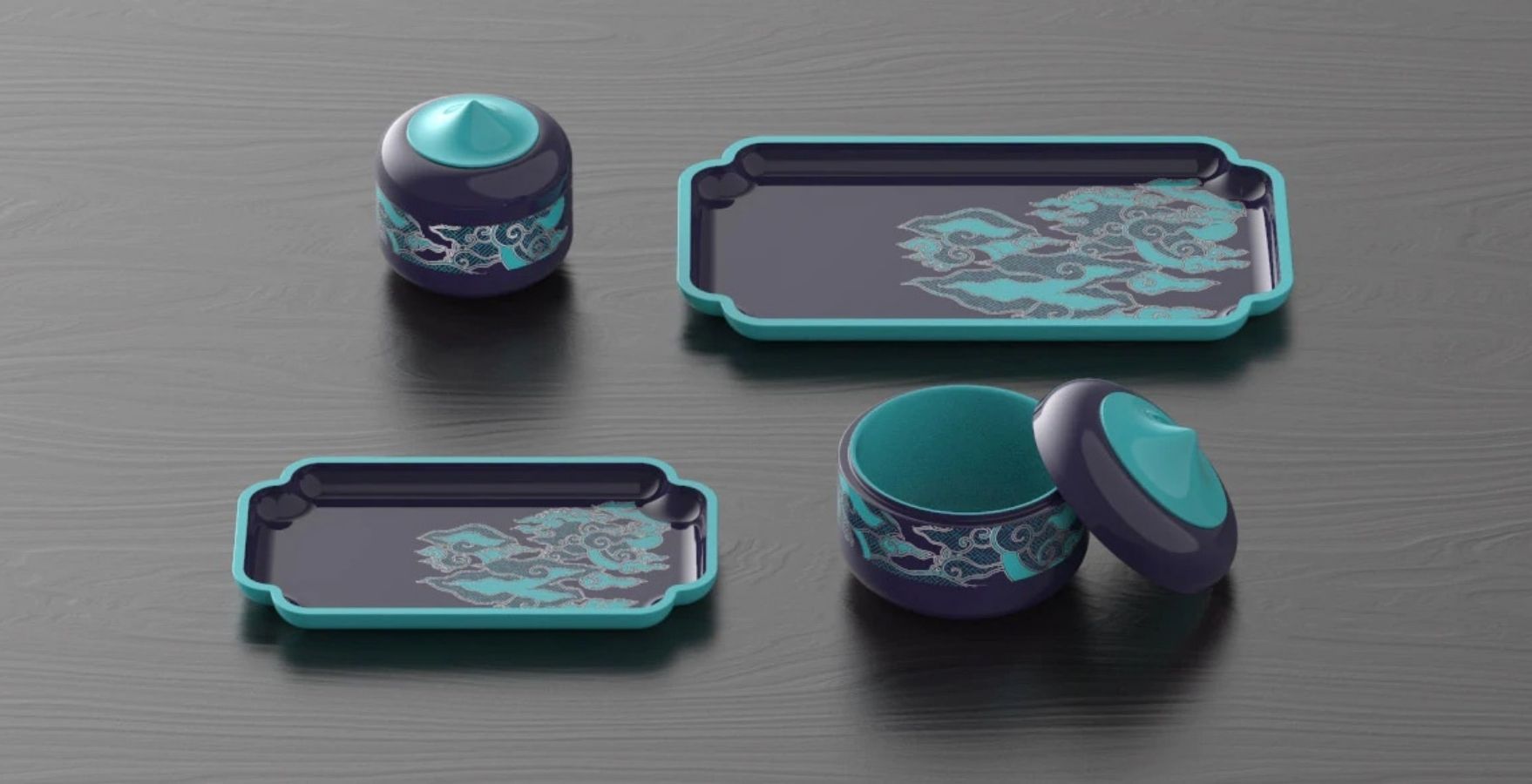 Traveling the seas along the Silk Road and beyond, lacquer as a material has been a part of our identity as a region for ages. From intricate tableware to exquisite furniture, lacquer has a studded resume that could put our best museums to shame. But, where did the journey begin and where does it end?

The word "lacquer" refers to "a colored and frequently opaque varnish applied to metal or wood, used for decorative arts, especially in Asia". It is not a singular material but rather a technique that utilizes different media producing similar results. In ancient India and Sri Lanka, "lac" or the material for lacquering was a scarlet resinous secretion produced by scale or "lac" insects. Lacquer in China and Japan was and continues to be made from the sap of the Chinese lacquer tree (Toxicodendron vernicifluum), which, when cleaned of impurities, can be used in its natural state. In other areas, like Southeast Asia and parts of the Americas, the material is obtained from saps and secretions from different plant and insect species. The characteristics that qualify a material fit for the title of "lacquer" include remarkable resistance to water, acid, and heat, to some extent. 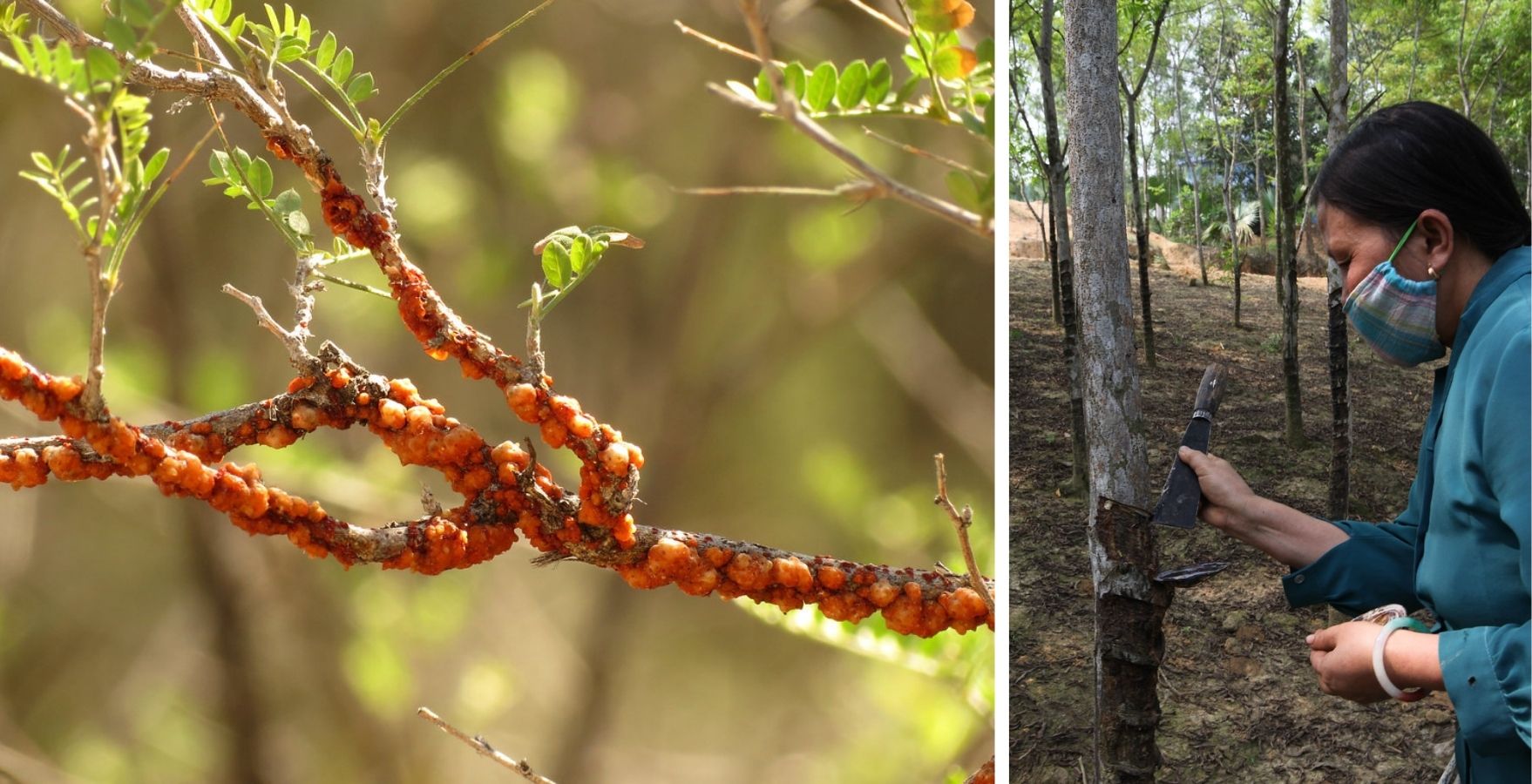 The lacquering process has evolved over the years, but still continues to be a labor of love. Ordinarily, raw lacquer is collected through notches cut into the trees and gently heated to remove excess moisture and impurities. The purified lacquer can then be applied to the surface of nearly any object or be built up into a pile. Each layer or coat needs to be dried in a warm, humid space before the next one can be applied. A high-quality lacquer object might have thirty or more layers, making the technique extremely costly, time-consuming, and all the more precious.

Regardless of where the raw material comes from, the lacquering technique always results in a lustrous work of art. Depending on where it originates from, it may have slight intricacies that help identify it. Lacquer carving, for instance, is a uniquely Chinese achievement. In Japan, on the other hand, the underlying shape of a lacquer object is never lost sight of and surface decoration is paramount. The Koreans often combine lacquer work with mother-of-pearl inlay or use the natural lacquering or "ottchil" form of finishing, which involves refining the tree sap until it turns into a translucent gloss for objects. 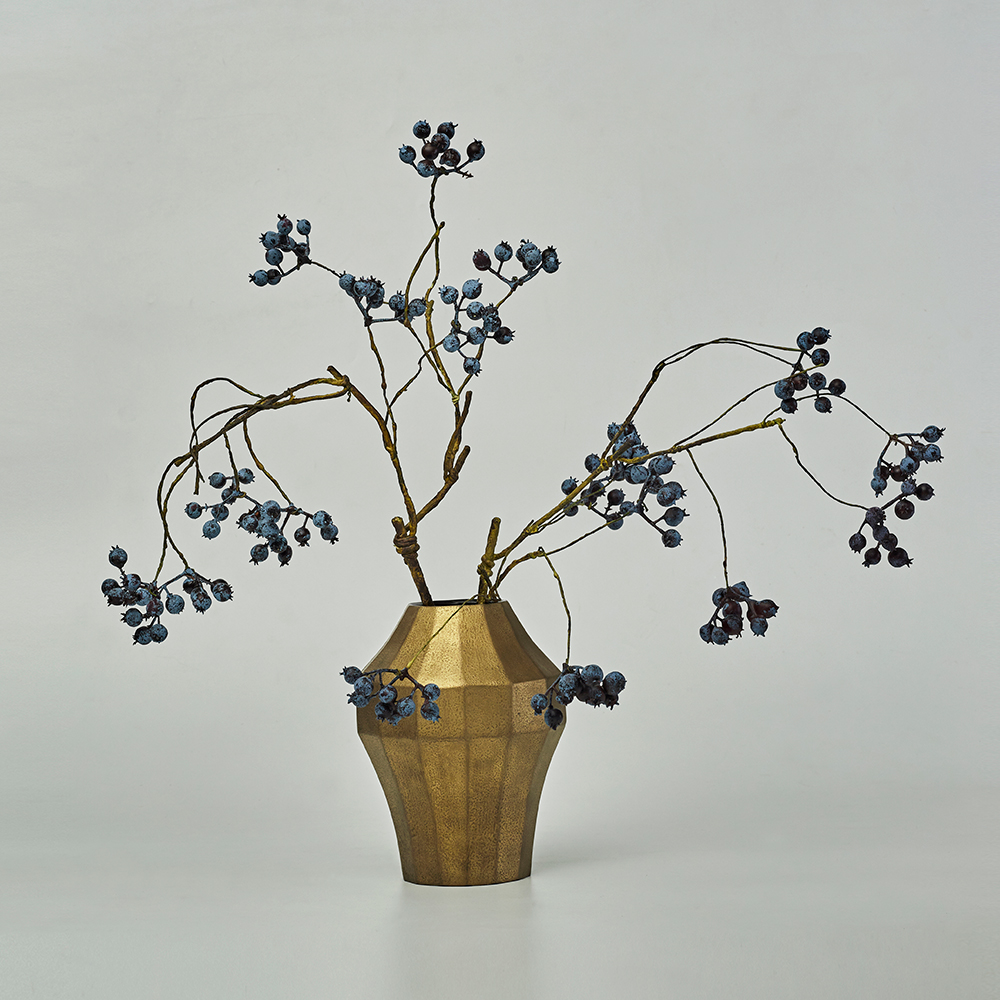 The Sensory Illusion Vase by YIQI.

Some of the earliest objects with basic lacquer coats date back to the Neolithic period in China (10,000 BC – 2,000 BC), while decorative objects with intricate work only made their appearance in the Warring States period (475 BC – 221 BC). According to an essay titled, Lacquerware of East Asia, by the Department of Asian Art of the Met Museum, lacquer as an art form developed in China along two distinct paths — pictorial (or surface) decoration and carving of the lacquer, with the two techniques rarely used in combination with each other. The earliest lacquered objects were colored black or red with the addition of charcoal or cinnabar to the refined sap. Then, as dynasties rose and fell, artisans continued to explore the possibilities of the art, and techniques like engraved gold (qiangjin), filled-in (diaotian or tianqi), and carved lacquer (diaoqi) were developed. Today, modern artisans in China are continually experimenting and innovating with the material. Hong Yi Dong, the founder and designer behind YIQI, for instance, is working on producing lacquer art and researching innovative ways in which it could be used as a material in the architecture and interior design industry. 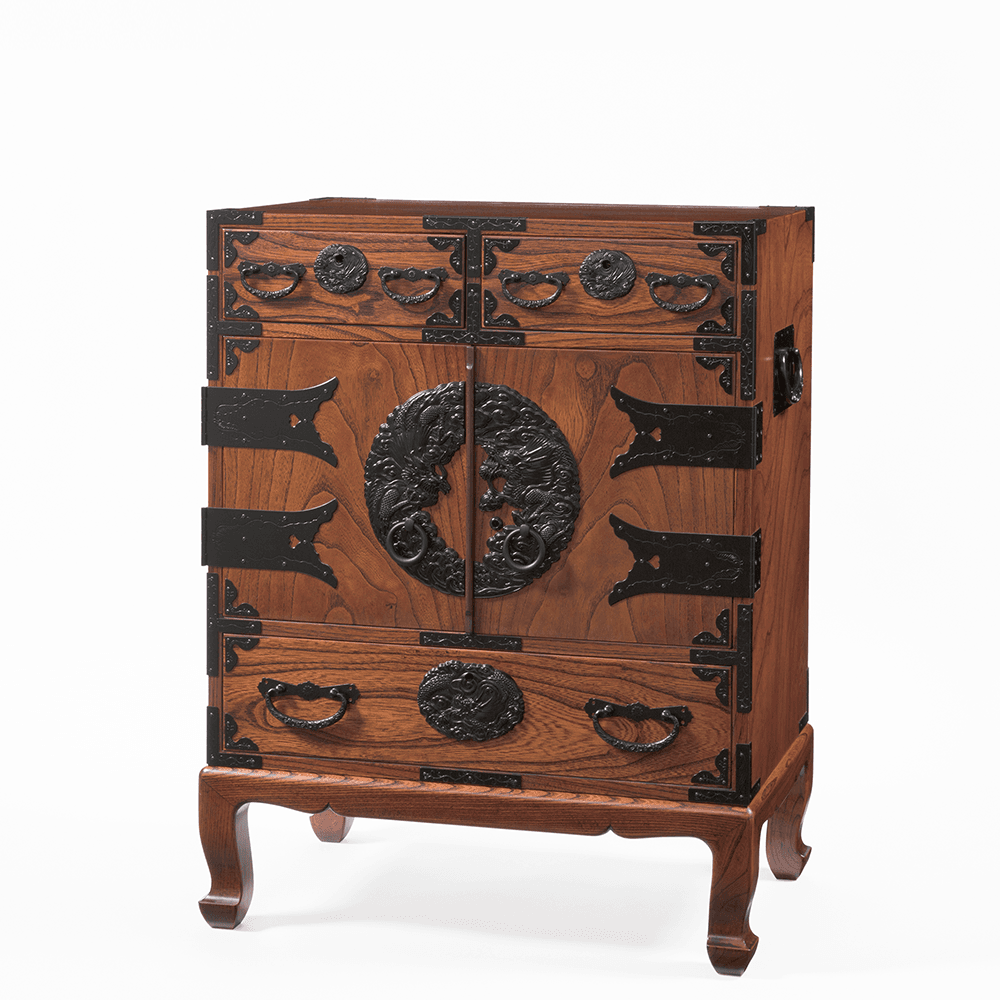 Having made its mark in China, lacquer travelled to Japan during the reign of the Tang Dynasty, a time where China had dominant cultural influence on Japan. However, once it reached the land of the rising sun, it took on a life of its own and continued to morph into other techniques. Japan mastered the art of lacquering on wood and using the material in combination with other metals like tin, lead, and pewter. The artisans exploited every physical property of lacquer: as a painting medium, as a moldable material, as an adhesive, and as a finishing varnish. Even today, several artisans are walking the same path, working towards keeping the traditional craft alive and ensuring it stays timeless. The Japanese brand, MONMAYA, for example, has been striving towards preserving the craft of making the traditional Japanese "Sendai-Tansu" or warrior's chest of drawers with locally-grown timber, Joboji lacquer (extracted from trees in the Iwate prefecture, Japan), and artisan-made tools, for the past seven generations. 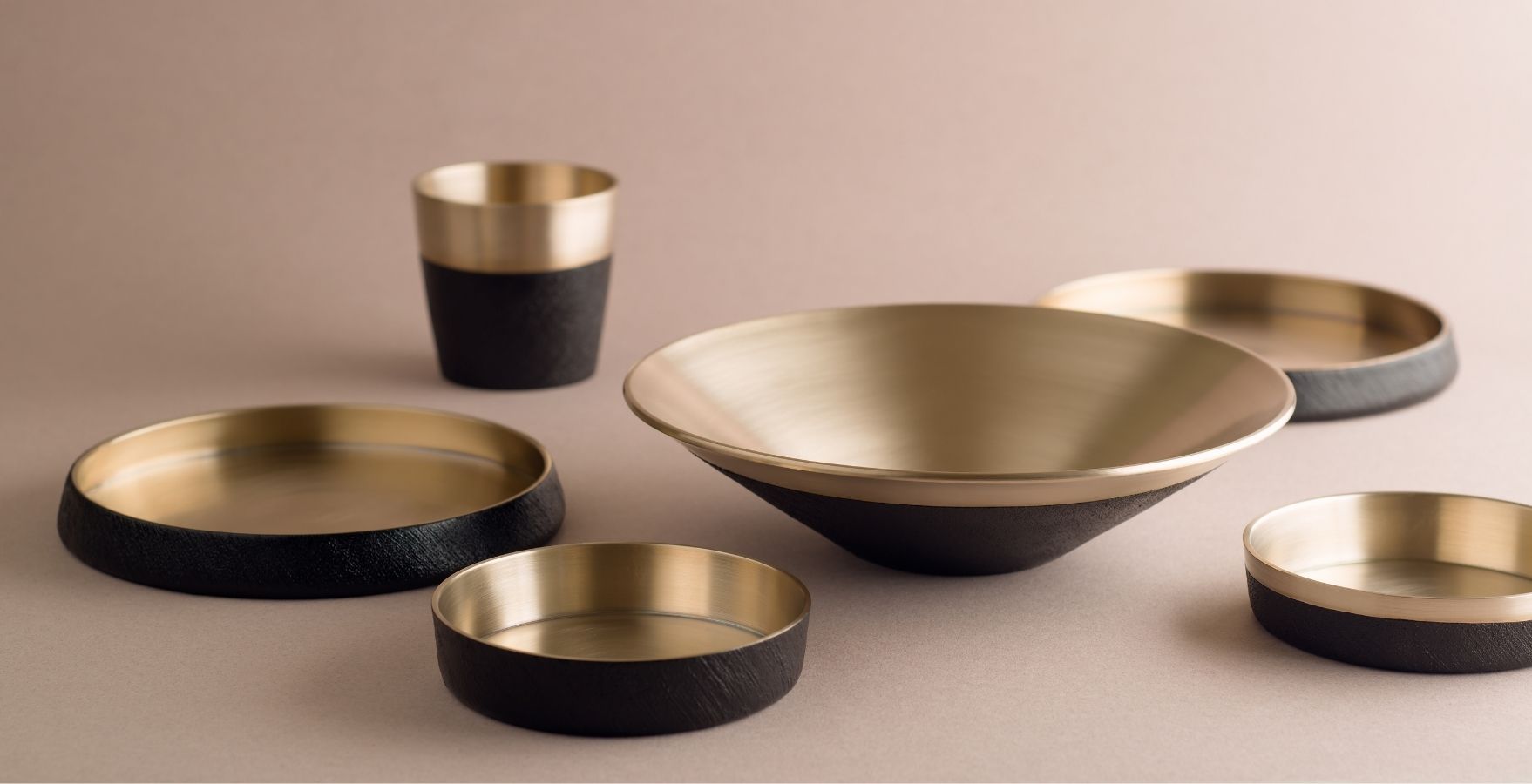 The Moonstone Collection of tableware by DaMoon.

In Korea, lacquerware truly became the "it" thing during the rule of the Joseon Dynasty, when it was used to create the most beautiful makeup chests or drawers. Using the ottchil technique, basic items were coated with a beautiful translucent sheen, while more extravagant pieces were decorated with mother-of-pearl (known as najeon chilgi) and tortoiseshell. Today, the ottchil technique lives on as local artisans and designer brands, like DaMoon, employ it in the making of contemporary products. Another strain of the technique developed by the Korean artisans was juchil, or red lacquer, which often symbolized wealth and good fortune. The royal family, as well as the commoners, always had at least one red item on them, either in their clothing or accessories when attending large events. It was also common for families to keep their lacquerware objects reserved, only for use during weddings and ceremonies.

Beyond East Asia, lacquer has also been a popular craft in Myanmar, where it is known as yun-de and primarily used to make tableware, boxes, and theatre costumes, masks, and headdresses. In Vietnam, artisans employed it as a painting technique called sơn mài, sometimes applying it in combination with crushed eggshells, gold and tin foil, and even sand. The lacquer boxes and trays by SCENE SHANG and Forbidden Hill are hand-painted by skillful and passionate Vietnamese lacquer artisans using modern techniques paired with the traditional methods.

Lacquer has existed in different forms across different civilizations, and has traversed geographical borders, adapting along the way, and embracing its new home fully, every time. It continues to be a cherished part of our art and craft industry, with modern artisans exploring its numerous possibilities. However, with more and more artisans and designers recognizing its value and potential, the transformative journey lacquer is on, it seems, has only just begun.